I’m going to start a bit unconventionally, with a question. What is a dream car for you? Supersport? Or a really tough off-roader? It’s tough with dream cars. Poster cars have a lot of the best, they are uncompromising in terms of performance, design and other parameters. And the Ferrari brand, which will be discussed here today, is one of the specialists in car posters.

Ferrari has always produced fantastic cars. The typically red lacquer low supersports excelled and still excel the competition in several respects. First of all, it is a technique used. Maranello is home to a group of magicians who, even with relatively conventional technology, can draw the best, tune the car to perfection. And when they add a few unconventional practices, a driving paradise is born.

Fantastic technology is followed by fantastic design. Although Ferrari has always had a tendency towards speed and racing, it still refuses to give up its design principles. Ferrari cars are, of course, refined in the wind tunnel, but local magicians have always done without ugly and overly aggressive spoilers. And when an aerodynamic element appeared on the car, it became an iconic part of the design, as was the case with the legendary F40 model.

However, the problem with poster cars is their limited usability. Driving a supersport – especially one of the older, uncompromising ones – is an unforgettable experience in many ways. There is an enormous force attacking all the senses. Driving such a car is difficult, it does not give the driver anything for free. And that’s how it should be, supersport is about making boys’ dreams come true, it’s about connecting man and machine, you pay your money here for the intensity of the experience and that fits the amount spent. 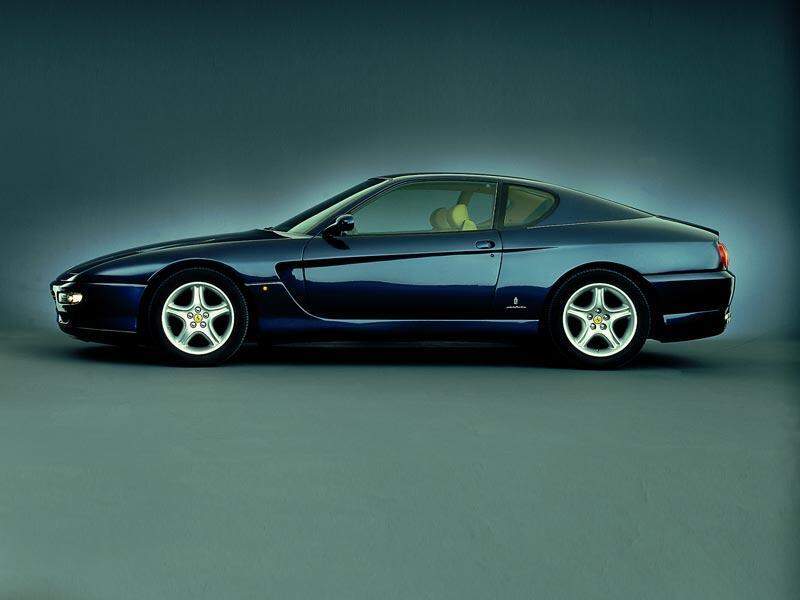 At the same time, however, this means that the dream car is relatively heavy and actually quite uncomfortable to use as a car. It’s a toy, it’s great, but it’s not practical. But I want to enjoy driving every day, I want to enjoy even the most ordinary commute of duty, I want to use the car on routes that others prefer to take on the plane. In real supersport, such a trip would probably discourage me physically, in a limo I would be bored to death again.

So what to choose? The Italians are offering a solution in the form of the Maserati Quattroporte, a limo with pure sports car DNA, but this is going too far in terms of compromise. As an everyday car I can hardly imagine better, but a dream car? It should be a step further. Maserati is not enough. The dream car should be Ferrari. 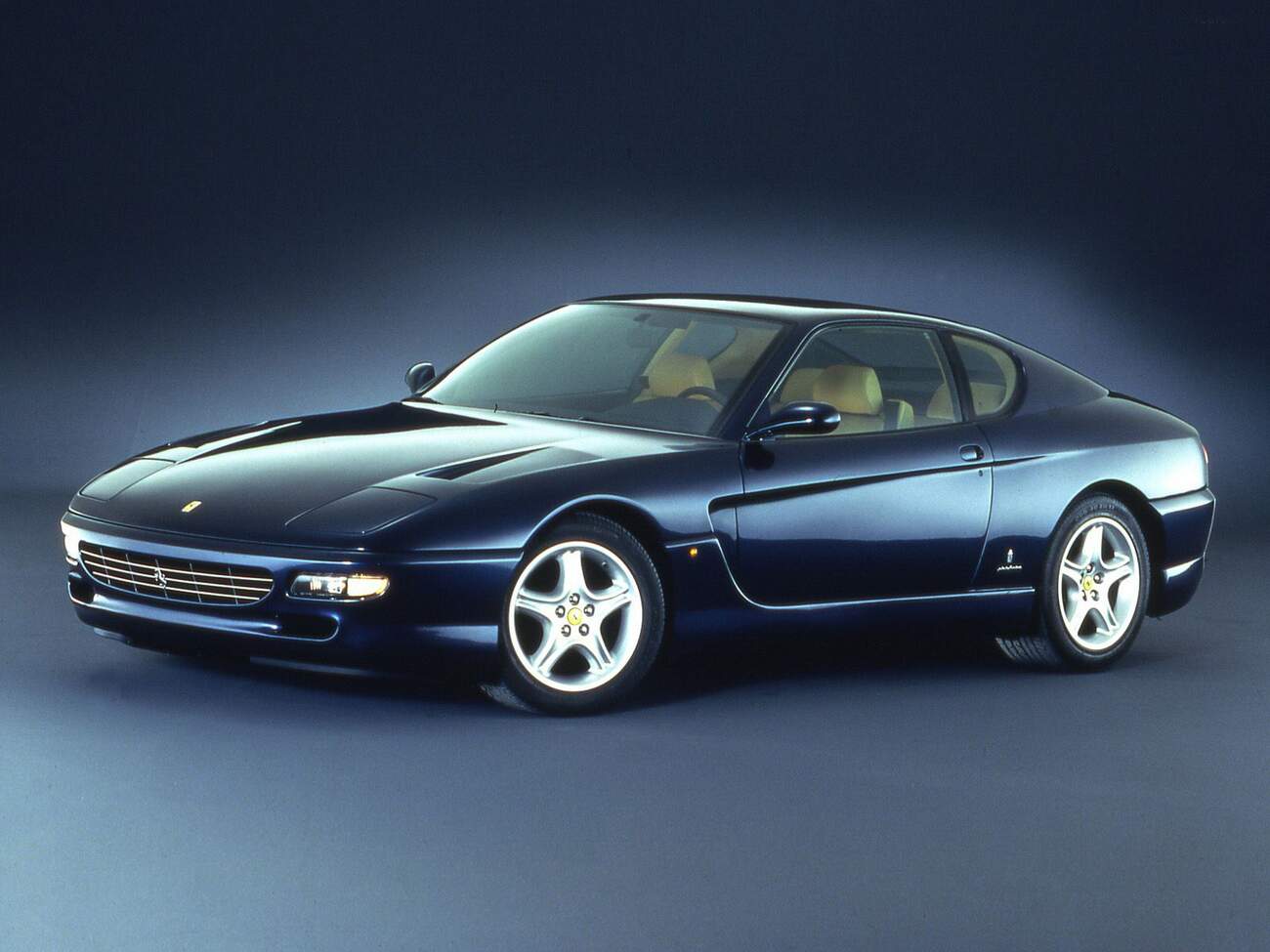 And that car is the Ferrari 456 GT. The large four-seater coupé or, if you like the GT, the grand touring car, has been a remarkable segment of the brand’s offering with the prancing horse in the coat of arms for many years. These cars have always been completely different, they stand out from anything you will find in Ferrari showrooms. Luxury, rich equipment and everyday use are combined with typical features of all other Ferraris.

The Ferrari 456 GT came on the market in 1992. The designers did a good job, meeting the car one could expect from the best sports cars of the time. The body traditionally consisted of a three-dimensional steel frame to which individual aluminum panels were attached. Traditional construction was made in an advanced form, aluminum parts were welded to the body with a ferret, composite materials were also used, from which, for example, the front hood is made. 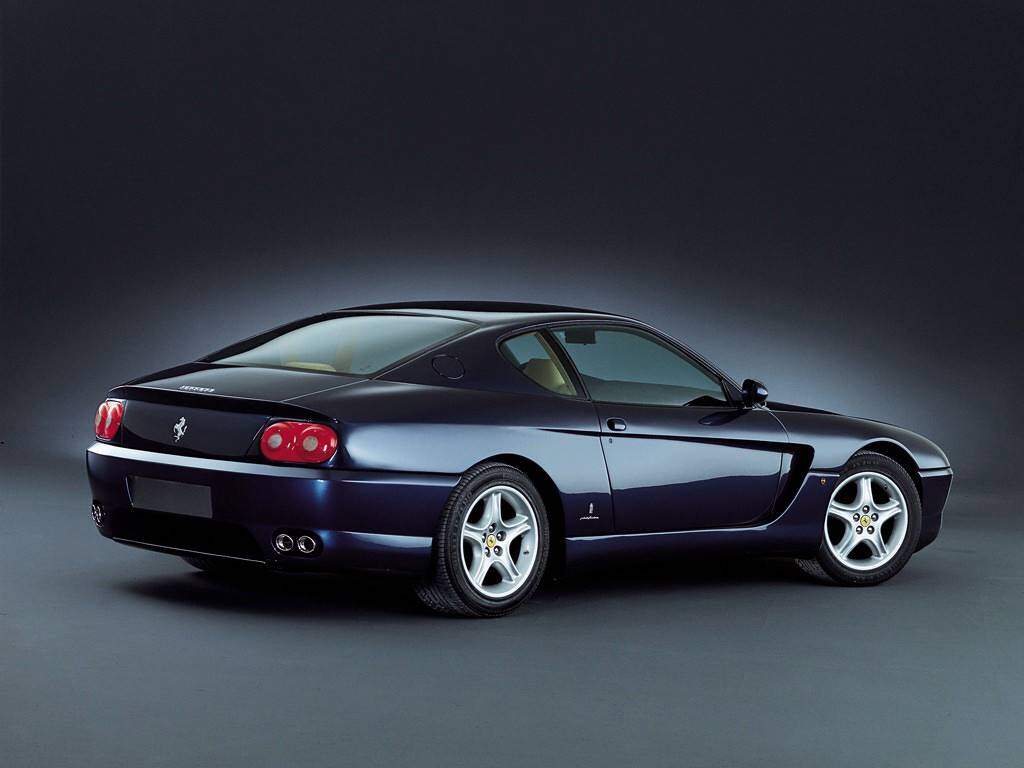 The large, elegant coupe, of course, did without some dramatic spoilers, such things are simply not worn at Ferrari, but aerodynamics were not left out here either. The designers have focused on the underside of the car, which has so far been neglected in the world of passenger cars. Here they have shaped the ground in such a way that it generates pressure itself at high speed. And in the end, the “wing” also appeared here, the attentive observer will certainly find it in the unconventional bottom of the rear bumper between the exhaust tips. It was also an active aerodynamic surface that changed angle depending on the speed of the car.

Car design for Ferrari has traditionally been created in the Pininfarina studio. For today’s conditions, the surprisingly compact car excelled in an elegance that needed no showing. All of these lines sort of follow each other in a logical way, there’s nothing irritating about the whole car, but the whole thing is extremely balanced and it’s a pleasure to watch the car. The bow keeps its own shape thanks to the tilting headlights, the era of which is gradually coming to an end. 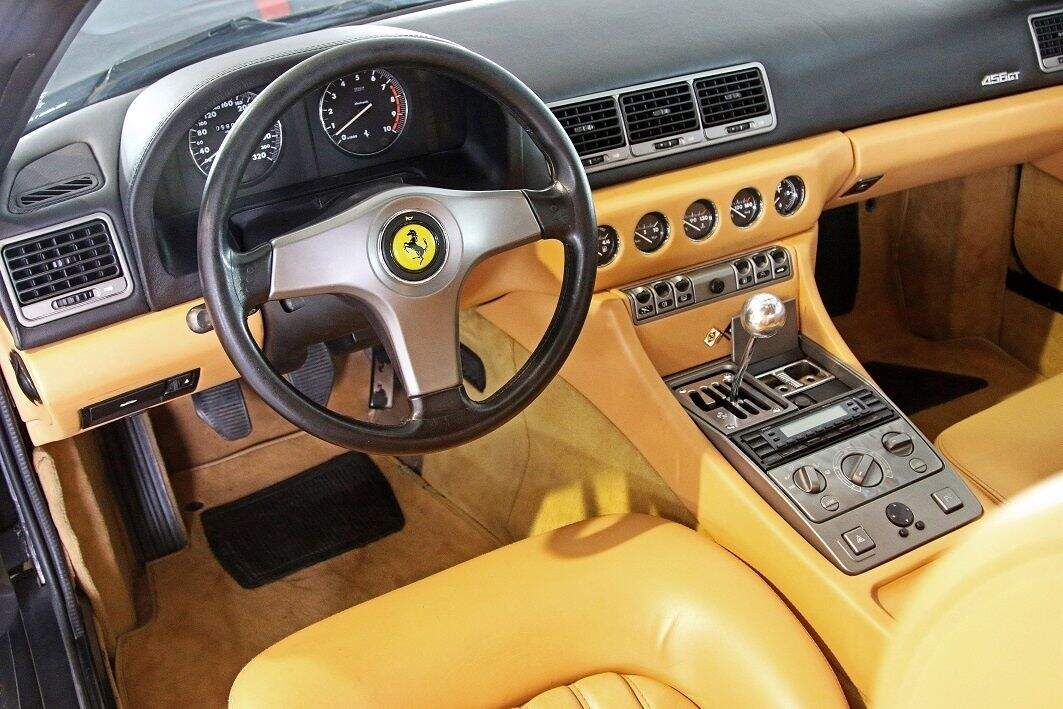 Inside, the situation was similar. At first glance, it’s a Ferrari, just a slightly different Ferrari. The whole cabin is wrapped in the strings of the best Connolly leather, the seats are electrically adjustable, in later versions the position can be memorized, there is a quality audio system, powerful air conditioning and everything that can be useful on many occasions. long distances. At the same time, however, there is a battery of indicators, in addition to the obligatory clock and fuel gauge, there is also an indicator for temperature and oil pressure and coolant temperature. The sporty three-spoke steering wheel (later replaced by a less attractive version with an airbag) perfectly complements the traditional open-shift decor.

The Ferrari 456 GT was powered by a royal engine. A twelve-cylinder fork was placed up front. Each of its twelve combustion chambers had a volume of 456 cubic centimeters (hence the car’s name), a total of less than 5.5 litres. The engine had atmospheric filling and four-valve technology, four camshafts driving the belts. The electronic injection system was supplied by Bosch. 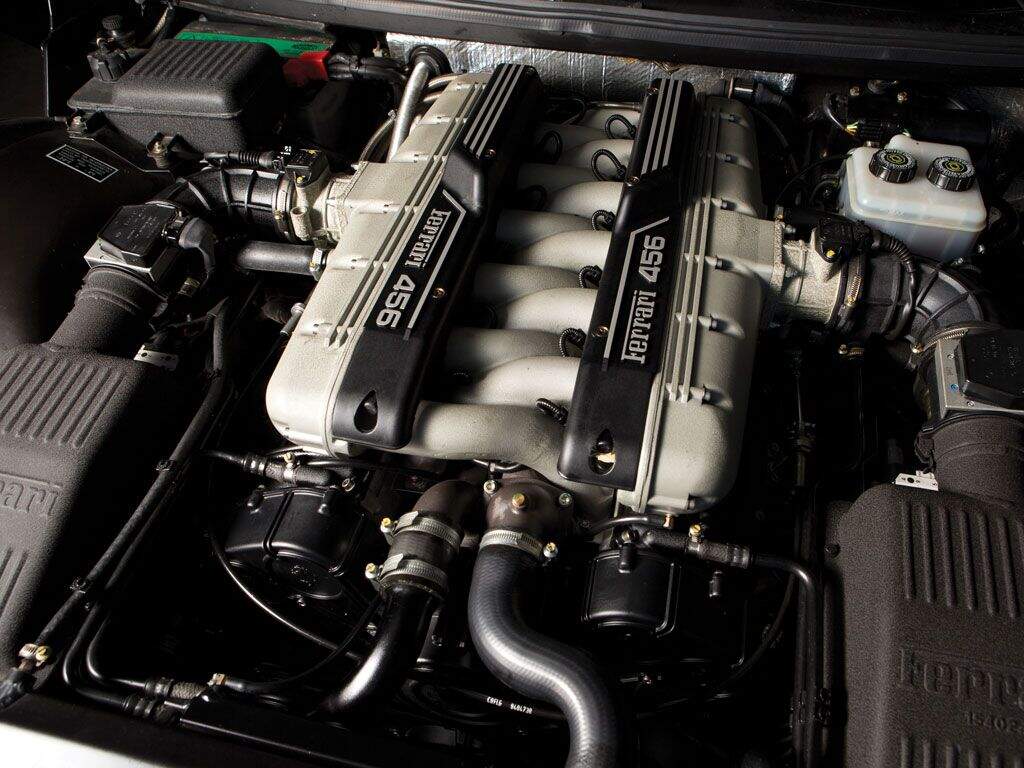 The power of the 442 horsepower engine is still solid today, and the Ferrari 456 GT only needed to exceed the magic limit of 300 km/h in top speed. Acceleration from zero to one hundred in 5.2 seconds proves that even if it is a GT, in this car you will certainly not be deprived of the experience of driving a real Ferrari. At the same time, the engine excelled in reliability, and daily use was recorded at Ferrari at very reasonable service intervals (basic visits of 10,000 km, major overhaul with timing replacement set every 50,000 km) .

The transmission was located on the rear axle, which helped to balance the car, the suspension was a double trapezoid on all wheels, there were adjustable shock absorbers, power steering with progressive effect and the ABS system could be deactivated on simple push of a button. So with the 456 GT you can enjoy what you have with every real Ferrari, a pure and unfiltered experience. At the same time, however, once the misfire was over, you could reactivate ABS and traction control, switch the chassis to comfort mode, fill up the 110-litre tank and go the distance. There was also a 456 GTA version, where the A indicates the presence of an automatic transmission – more precisely an FF Developments four-speed automatic. 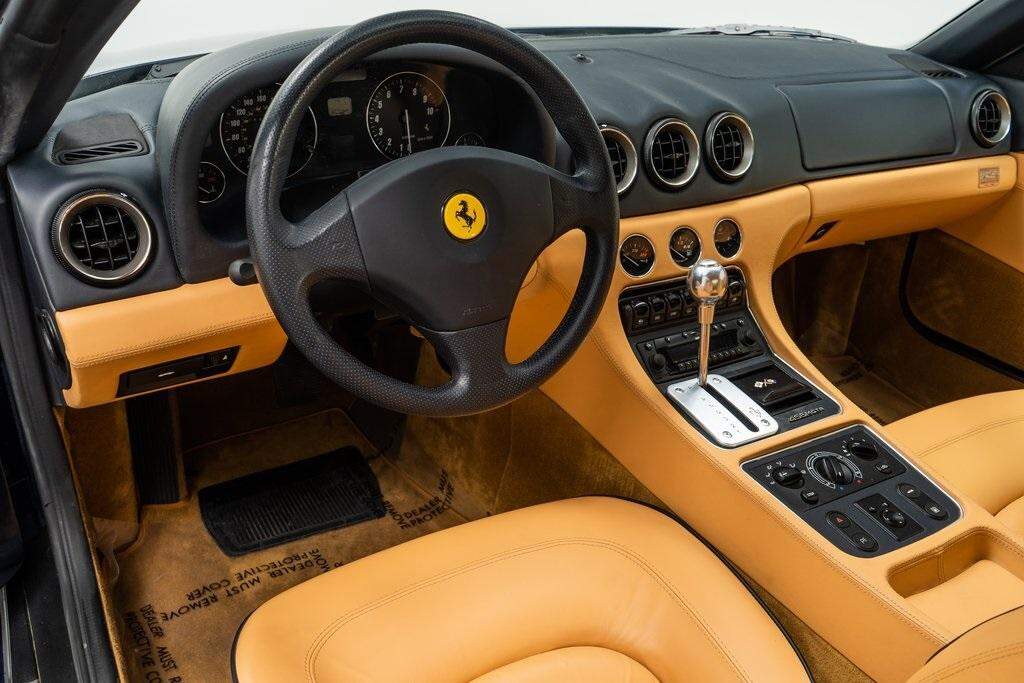 In 1998 Ferrari presented an improved version of the 456M. The design of the car was smoothed out smoothly, the car lost its vents in the hood, and the spoiler integrated into the rear bumper was already solid. The front mask also changed, which was now larger and contained a pair of lights. Contrary to expectation however, these are not fog lights, these two headlights serve exclusively as a horn – when the left lane of the freeway needs to be cleared and flipping the ‘turn signals’ is an unnecessary waste of time…. The changes also affected the interior, the air vents were newly round, the steering wheel and the layout of the center console were new.

In addition to the coupe itself, the Venice series was created on the basis of the 456 GT models. These cars were built by Pininfarina itself, but with the consent and in cooperation with Ferrari. These were four-door sedans and even a five-door station wagon for important customers. The price of these cars would have been around one million dollars. A total of 14 Venice series cars were created. 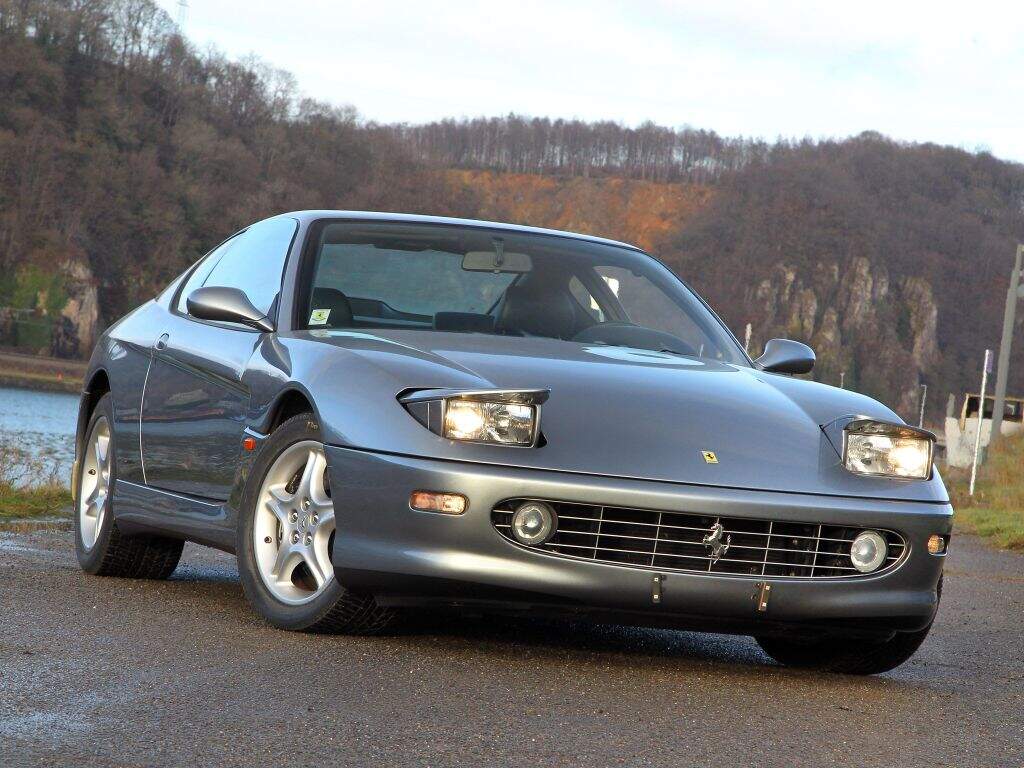 Production of the Ferrari 456 GT lasted a respectable 11 years, after which the car was replaced by the Ferrari 612 Scaglietti model. The novelty took the technology a step further, but at the same time it grew too big for me and left the understated elegance of the compact 456 GT in my eyes still unmatched. The car was different, unconventional, rarely red, but it connected the worlds I love so much. It made Ferrari the real car of my dreams.