How long have you been in a relationship?

Philip: We know this exactly because we celebrate every month – the monthly anniversary of our relationship. Usually we treat ourselves to a wellness stay or a visit to an interesting place.

You found each other through the dating app. What intrigued you so much about the other?

Karl: I couldn’t sleep that morning, so I signed up for online dating. Because there were only boys, I paid for the extension the day before, and suddenly Filip jumped.

Philip: I was also interested in the fact that I hadn’t seen Karel on a date. Usually there are always the same faces. My favorite type is manly, big, whatever you catch. But I haven’t seen someone like that in the app for a long time. Also, I didn’t like meeting local men, I preferred to go there for tourists. But Karel fascinated me so much that I said to myself: a guy like that and a local, I’m going to write to him!

Karl: Philip came to see me that day and never left. It really was! 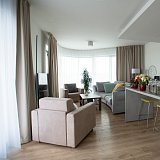 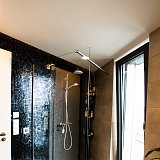 Sources: Alex Shnaid for HIM, with permission

Would you have the chance to meet in real life?

Karl: We would never have met without the app.

Philip: And even if we saw each other in a bar, we wouldn’t talk to each other. I think I’m not Karl’s type.

Karl: I wouldn’t dare go to Philip’s at all.

As a couple, you look inconsistent, each looking like a different guy. I would say Karel drinks a beer and Filip is more of a mojito…

Philip: And it’s the other way around! When we order in a restaurant, they usually bring Karl the beer and his latte seats in front of me. And then we’ll trade it.

So what’s your favorite drink?

Philip: We have a drink together, and it’s Pina Colada.

And what about your favorite movie?

Karl: We have the same.

Philip: It’s sun, hay and a few slaps. We watch it once a month. We tell ourselves half of it before the message of the film rings out.

And a favorite sport?

I didn’t expect you to be so attentive…

Karl: We really looked for each other when we found each other.

Do you ever go to a party together?

Philip: I used to be a party animal so at first I thought that would be a problem. I lived on Národní třída for several years – my friends called me to say they were out, I just got dressed and followed them. What I did with Karel, I changed my way of life.

Karl: I’m the family type and Filip took it from me. Previously, I had been in a relationship for over 10 years and was established in the house, garden, dogs style. I went crazy before and Filip adapted to me a lot.

Philip: Sometimes I start to miss it a bit, but I enjoyed it a lot. Now, on the contrary, I enjoy another stage of life which is just as beautiful. And it’s definitely healthier. (laugh)

So you have most common interests?

Karl: We have exactly the same interests.

Philip: No, it’s just completely different! (laugh) And we respect each other. For example, Karel likes trains that didn’t tell me anything before, but now I know a lot about them. The same fireworks. Karel has never danced before, but since he’s been with me he’s been dancing more than me. And it’s awfully cute. In the morning, for example, I put music on in bed and Karel leaves. He is able to dance three songs in a row. Just what one liked, the other took over.

Karl: I took Filip’s dance and also a bit of order.

Philip: Karel also has great taste. It’s always me who chose the holidays, the hotels, the restaurants for the others. I rarely left it to anyone else. But since I’m with Karl, he basically chooses everything. And what he chooses, I would choose too.

So Karel chose the equipment for the apartment?

Karl: This house is for rent and the Luka Living concept insists on getting the whole apartment, including the equipment. So everything here was apart from this sofa, which we chose ourselves.

Philip: There was only a small couch here, and we wouldn’t have had a good time together. (laugh)

Karl: But we have a slightly different taste and once we have our own home, we will do it differently.

So what’s your taste?

Philip: We love natural materials, wood and stone. Or even rusty things…

Karl: Yes, industrial style, whether metal with glass, dark tiles, bricks and others. We have an idea.

Did you move into this apartment together or did one of you already live here?

Philip: Karel lived in this house, but in a smaller apartment. One day this penthouse came loose and we really liked it. I rented my apartment on Národní třída and we moved here together.

Karl: Filip came from the center to see me in the village, as he called it at first. Luka was for him the same as Pilsen or Brno.

Philip: It was a bit of a shock to leave the center of Prague. But it’s quiet here and thanks to Karl, I feel more at home here. When I come to the center now, it excites me, how crowded it is. What I enjoyed before comes to mind too much.

Didn’t you think about moving to Philip’s center?

Karl: Nope! I come from Neratovice and went to high school in Prague. So I had malls, bars and clubs in my 22s. Then I started my career and gave up a lot of social life. For me, the city center is traffic jams, parking problems and billions of people. I admit it occurred to me that maybe Filip would suggest that we live together in the center. But I would rather try to persuade him to get away from here, from here in nature, in peace.

How much time do you spend at home?

Philip: A lot of. That’s why we try to go somewhere for the weekend twice a month. Even if we pay the rent, we will sleep elsewhere. So that we still miss our sofa and our bed a little.

Karl: I worked from home during covid so I can work today. So you are at home most of the time.

What’s your favorite place to relax at home?

Philip: For me it’s a sauna, where I always regenerate after training.

Karl: I like to put the grill on the patio and throw something good on it.

Last year, in an interview with LUI, you mentioned that you would like a house. Where are you with this plan?

Karl: We are looking for announcements. The prices are skyrocketing, you have to think a lot about it. We also discuss whether to buy anything. We have no children and then we have no one to talk to. So why own anything? In the same way, in old age, we would like to go somewhere in Spain, Bali or Mauritius, from where we have now returned.

Philip: And grow old in warmth and peace, without wars.