A few days after the start of the invasion, Russian troops occupied the Zaporozhye nuclear power plant, considered the largest in Europe. The bombing of facilities in southern Ukraine has drawn heavy criticism from the West and experts. On the first day of the invasion, the Russians also took control of the site of the former Chernobyl power station.

Ukrainian Deputy Prime Minister Iryna Vereshchuk said this week that Russian troops were behaving irresponsibly near the occupied former power plant and that it burns in several places in the enclosed area around it. Today, according to Vereshchuk, the Ukrainian Armed Forces warned of the danger of exploding munitions at this power plant.

The General Staff of the Ukrainian Army said today that the invading army reinforces its presence near the Chernobyl nuclear power plant.

Alexander Lukashenko is traveling on April 12 to celebrate Space Day with Vladimir Putin, they will discuss Ukraine. They meet in the Russian Far East in the Amur region.

Ukraine can remain among the top ten food exporters this year if seaports are unblocked. Until February 24, 90% of Ukraine’s agricultural exports passed through the seaports of Odessa and Mykolaiv.

The Russian Federation forcibly issued passports to Ukrainians expelled from the occupied territories. This was stated by Ukrainian mediator Lyudmila Denisova.

“Russia began issuing passports to Ukrainian citizens who were forcibly deported to various regions of the country from the aggressor. By intimidating the most vulnerable categories of women – women, disabled and pensioners, the authorities of the attacker received nearly 14,000 applications for Russian citizenship and issued 12,000 passports,” Denis said.

According to her, such actions of the Russian occupier aim to continue the forced integration of the captured population into the Russian political, economic and humanitarian space.

“Forced passporting is illegal and unrecognized in Ukraine, it contravenes the principles and norms of international law and constitutes a direct violation of the Geneva Convention on the Protection of Civilian Persons in Time of War,” Denis said.

Grossi thanked staff at the Southern Ukraine Power Plant, located in the Mykolaiv region north of Voznesensk, for “perseverance and resilience” at a time when Russian troops are attacking Ukraine, and promised the agency’s aid to Ukraine. “We are ready to support you as best we can”, he told school officials and Ukrainian authorities.

Ukraine has one of the largest nuclear energy programs in Europe. There are 15 nuclear reactors in four nuclear power plants in the country, and special operations apply to the decommissioned Chernobyl power plant.

“Employees of all Ukrainian nuclear power plants deserve respect and admiration for keeping them safe even in the midst of conflict,” the IAEA chief said. Grossi believes that the presence of his agency’s experts directly in Ukraine will help reduce the risk of a nuclear accident.

This was also announced on Facebook by Yaroslav Yemelyanenko, a member of the public council of the Ukrainian State Agency for the Administration of Closed Areas. “Another batch of irradiated Russian terrorists who took over the Chernobyl zone she was brought today to the Belarusian Center for Radiation Medicine in Gomel,” he wrote.

Russian troops have already begun to withdraw from the decommissioned Chernobyl nuclear power plant. Referring to a senior US Department of Defense official, AFP reported today.

“Chernobyl is another area where (troops) have started to regroup; leave Chernobyl and head for Belarus,According to AFP, said a Pentagon official. 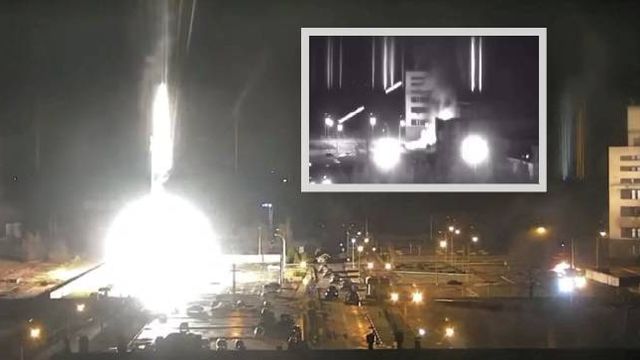