Ever since Russian President Vladimir Putin began moving his troops to the border with Ukraine, rumors have swirled about the danger of an attack. “It just came to our knowledge at that time. There was a lot of talk everywhere about a possible invasion. But until the last moment, it was impossible to believe that this would happen in the 21st century? In the modern world?” says Olena Zelenská in an interview with Vogue.

The day before the invasion, it was in a normal spirit. The first lady did her job and waited for the children to come home from school. She then helped them with their homework and went to bed. But they woke up to a completely different day. “I woke up around four or five o’clock,” Zelenská described, adding that she was awakened by a strange noise. “I didn’t immediately realize it was an explosion,” she says her husband was already awake. “It started” she repeated her husband’s words. It was the last time she saw him in costume. Since then, her husband only wears military clothes.

Cry for loved ones

Like everyone else, she worried about her loved ones and acquaintances. “At some point I realized that I didn’t know if I would ever see them again. Those I love, my beloved people! It was probably the first time I cried – the first time I let my emotions out. I couldn’t take it.” Zelenská talks about when the real weight of war fell on her.

According to her, Russia was trying to antagonize the Ukrainians. He tried to provoke a confrontation between them, only for all the citizens to start sticking together. According to Zelenská, this is the strength of the Ukrainians. “When one of us is tortured, raped or killed, we all feel like we are being tortured, raped or killed. It is this personal anger and pain that we all feel that immediately activates the desire to act, to resist aggression, to defend our freedom.” she said that every Ukrainian defends his country as best he can. The soldiers fight with arms in their hands, the teachers continue to teach despite the war, the doctors operate during the war of rage. Whether it’s an artist or a hairdresser, everyone tries to help their country.

Extraordinary strength was demonstrated by Ukrainian women who had to give birth in shelters or stay with their children in bombed-out hospitals. Others took their children and families and fled the occupied towns. Zelenská recalled the story of Olga from kyiv, who defended her two-month-old daughter with her own body, or the story of Natalie, a teacher from the Chernihiv orphanage, who lived with her 30 children in the basement .

Many of his friends gathered all their strength and started to help. “I will always remember the courage of my friends! What can these women – fragile and elegant in times of peace – do in times of war! Their stories inspire. I am so proud of them!” added the wife of the Ukrainian president, adding that, like her fellow citizens, she hoped for peace. “Like all mothers and wives, I am constantly worried about my husband and doing everything I can to keep my children safe.” she concludes.

Britain’s leading role in helping Ukraine will go down in the history of democracy and Europe. According to UkrInform, President Volodymyr Zelensky said so in a video.

Zelensky stressed that the visit of current British Prime Minister Boris Johnson to Ukraine showed that nothing stands in the way of freedom and leadership. The president said Johnson was one of those who had no hesitation in supporting Ukraine.

President Volodymyr Zelensky is convinced that Russia did not intend to limit itself exclusively to Ukraine, the goal of its aggression was the whole European project.

“Therefore, it is not only a moral obligation of all democracies, of all European forces – to support Ukraine’s desire for peace. This is, in fact, the protection strategy of any civilized state. As much pressure as possible on Russia to restore peace and security as quickly as possible. Restore the force of international law as soon as possible and stop the disaster of force law enforcement. A disaster that will inevitably affect everyone,” stressed Zelenský.

The Russian governor accuses Ukraine of bombing Russian mortars. Kursk region governor Roman Starovojt said that on April 9, the Jelizavetovka border crossing, located a few kilometers from the Ukrainian region of Sumy, was bombed. Russia has repeatedly accused Ukraine of attacking its territory without any evidence, which Ukraine has denied. 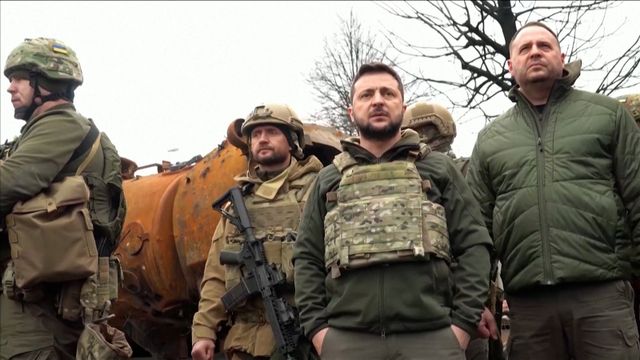