You live in a duplex apartment in Letňany. How long have you been here?

Jakub: It will be six years. Lukáš and I have celebrated our eighth anniversary twice, but we have been together for ten years. (laugh)

What do you mean, twice the eighth birthday?

Jakub: Well, when we first celebrated it, we found out it was only the seventh. (laugh)

Do you envisage a celebration for the decade of the common cycle?

Lukáš: Perhaps such an exceptional mortgage payment! No – it’s true that we have planned a little party for the summer, but we’ll see if it works.

So registration is still planned?

Lukáš: We registered in February this year. It was really just a “registration” and we were thinking of combining a bigger event with a wedding. If we see it.

Jakub: The lady in the office asked if we wanted it with ceremony and somehow noble, or just the most necessary in the office, so we said that when it comes to registration only, whatever we we need is enough. So signature and house.

Lukáš: She could have spoken to our souls, whether we were together for better or for worse… But only a minimum shortcut was enough for us. Basically, only Cuba ran away from work during the lunch break. (laugh)

You already have a son – how old is he? 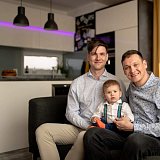 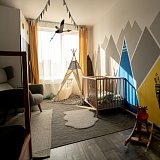 What did you have to pay when the baby arrived?

Jakub: We moved the chair down and turned the upstairs room, which was used as a gym or warehouse, into a children’s room.

Lukáš: We didn’t really have a place here. So far these toys. (laugh) From the beginning, we chose 3+kk, because we wanted to have an apartment big enough for the family. But I must say that the stairs are not completely warm.

Jakub: It seemed like the playhouse was great, but with this kid it’s not ideal. On the other hand, I think there are also people who live on the fifth floor without an elevator, they probably have worse.

Jakub: Lukáš’s parents live nearby – ten minutes by car. And at the same time, a little set back from the house, we are set back from Prague and essentially in nature.

Lukáš: We wanted to live in Prague for work – even though I am in kindergarten now. At the same time, Kub’s parents live on the Hradec Králové highway, so the location suited both of them.

Do you plan to stay in Letňany?

Lukáš: We will certainly live here in the fifteen or eighteen years of Vašík – or his sisters – for example. Because of kindergartens, school, doctors, work.

Am I right to say that a second baby is planned? Or does it already exist, right?

Jakub: We are planning, yes. The first attempt didn’t work at the end of January, so we have a second one on April 20. With the same gift egg as Vašík’s, the surrogate mother will be the same.

Lukáš also takes care of the housework, since she is on maternity leave with Vašík, or do you take turns at home?

Lukáš: I haven’t seen Cuba since I was born, so I haven’t cleaned up! (laugh)

Jakub: When I come home from work I want to focus more on Vašík, that’s true.

Lukáš: But I must say that I take care of the little one from Monday to Friday and the weekend belongs to Kub. It’s good that I know, when Vašík needs attention on Fridays at five o’clock in the afternoon, I don’t have to worry that it depends on Cuba. We take turns and it works.

Jakub: Above all, I’m glad that, despite our joy and a lot of worries about Vašík, we manage not to spend our whole lives at home, but that we still have enough time for an active life.

I see there is a big plant behind you. Do you like flowers in the apartment?

Lukáš: I like flowers so that they are not completely naked in the apartment. But at the same time, it bothers me that it has to be watered. (laugh) However, now that I’m home, I’m fine.

Lukáš: Vašík started modifying our plants a lot, so there was another palm tree under this one, but of course it’s not there anymore… On the other hand, we have fruit trees on the terrace.

Jakub: This is our orchard. We have black and red currants, cherries, peaches, peaches, apples, blueberries and currants… They are doing well. We had four apples and eighteen cherries! (laugh) But the peach was about forty years old.

So the terrace is a popular place within the apartment?

Jakub: Absolutely. As soon as it’s summer, we actually have two more bedrooms. We have a bent hot tub under the stairs. Letňany evenings in summer on the terrace, 38°C whirlpool, barbecue, bottle of wine – it’s like in Croatia!

Which of you is the best at home renovation?

Lukáš: Cuba is occupied – you have to drill a hole. But I have to paint it for him, where he should be! (laugh)

Jakub: I don’t have the nerve to measure it and I don’t mind if something is a little crooked. Lukáš would not have survived even a slight incline. We have therefore arranged it quite well…

Lukáš: I always try to find something. Cuba doesn’t quite make aesthetic sense and would like the simplest option and to have it done as soon as possible. He doesn’t even want to talk to me about it, but I need to talk about it. So we haven’t done much yet.

Jakub: Because my version always seems too simple to Lukáš. I don’t argue with him, so he doesn’t mind that we haven’t given it enough critical insight and broken it down properly. Therefore, it is never approved.

What are we talking about ?

Jakub: we would like a wall behind the TV, shading the terrace, we didn’t agree on the blinds… There are a lot of projects ahead of us. At the same time, however, we have agreed to invest currently, rather than in projects in the apartment, in our baby girl, who will – hopefully – come soon.

Will the children have a common room?

Jakub: We bought a studio next door. So when they grow up and they start getting angry, we’ll go through that and make some extra room.

Lukáš: We estimate that it will be like that when they go to school and everyone wants their space and peace, for example for chores…

What was the last change in the apartment?

Jakub: It was Vašík’s room. Lukáš had a whole month off and did everything: He painted, built furniture, invented and improved, he went to Ikey…

Lukáš: It was one of my reactions. It was five months before the birth and we were completely ready. Bed linen included!

Do you like when everything is tidy and ready?

Lukáš: We liked when everything was clean, but now we are a bit reduced. A little enough.

Jakub: Everyone who came to see us told us what it would be like if there was a baby in our apartment. And they were right. Our dream, for example, was a completely empty line. So it’s a teapot that can be forty degrees, then came a bowl of fruit, towels – dry and wet, vitamin D, baby bottles… Well, now we have a book of names for the little girl.

Who came up with Vašík’s name?

Lukáš: I chose the first name, Kuba chose the surname.

Jakub: Since our acquaintances already called him Vaklav, we gave him a second name. After all, he’s American, so Vaklav doesn’t have to be for English speakers and William can address him.

What style do you like to match your life with?

Jakub: That’s a question for you… (looks at Lukáš)

Lukáš: We like the Scandinavian style. Simple, maintenance free. No shelves and exhibits.

Lukáš: I want to finish the wall behind the TV! But we’ve been doing it for five years, so I’m sure it won’t be this year.

Jakub: And I would love to hang every free wall with our pictures. Make sure they are in the toilet. I think it looks better than bare walls. But I haven’t experienced it yet. (laugh)