Activist in the role of a victim of the Buče massacre. The Dekomunisti association protested against the Russian murder in Ukraine PHOTO: Jenny Nowak / with permission

The monstrous massacre of the civilian population in Ukraine by Russian soldiers shocks the whole world. And pictures of people handcuffed, tortured and shot were flying around him. Thus, more than a dozen demonstrators, victims of attacks, lay down on the sidewalk on Saturday in front of the Embassy of the Russian Federation in Prague. Artificial blood flowed down the road, reminiscent of the real Ukrainian blood that Russian attackers spilled daily. The event took place under the direction of the Dekomunisti association.

“We decided to organize this event so that the people of our peaceful Czech Republic could see the sight that Ukrainian citizens expected after the withdrawal of the Russian army from their cities. The inhumane treatment, rape, the robbery and execution of civilians from Buč, Mariupol, Boroďanka and many others showed the brutality and lack of any sign of humanity on the part of the Russian aggressors Unfortunately, a large part of our fellow citizens still do not believe not that such a thing happens a few hundred miles from us. With this protest, we will only show the visual side of these horrors. You cannot show the suffering, the despair, the sadness and the loss of everything hope for the future,” the association said in a statement.

Anyone who drove or walked on the Street of Ukrainian Heroes (until recently Coronation) around the entrance to the Embassy of the Russian Federation building had a view of the figures lying motionless on the sidewalk. Man with handcuffed hands. Old lady on crutches, face down. Woman with baby leaning against a tree. An old gentleman with his head covered. Cyclist knocked down by a deadly bullet… All motionless, all soaked in “blood”. The concept of a living picture, as such scenes are usually called, in this case took on a darker connection.

All of this took place in an urgent reminder of the brutally executed civilians, inhuman crimes that came to light after the Ukrainians expelled the Russian army from many of their towns. The number of victims continues to grow, more and more mass graves appear, many dead lie under the rubble of bombed houses. Real blood flowed in the streets of Buče, Boroďanka, in front of the Kramatorsko station, where dozens of people died on Friday under Russian bombardment. Thus, the artificial rolled down the sidewalk in Prague on Saturday.

“We wanted to imitate as closely as possible what we saw in the photos, so terrible that the social network Facebook often hides them from its users as too drastic,” said one of the FORUM 24 participants. The Dekomunisti association recently inspired its followers abroad, after the world-famous group Anonymous posted on social media a photograph of the Russian Embassy in Prague covered in bloody “film”. The buildings of the embassies of the Russian Federation in Ireland, Germany and elsewhere were similarly decorated. 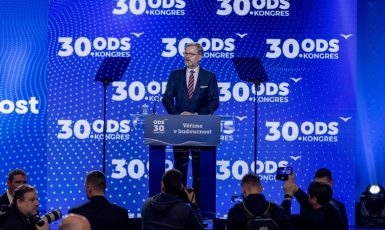 Petr Fiala has restored the role of the key party in Czech democracy to the ODS. Congress was his triumph

STAN MP Martin Exner was also there, he arrived on a bicycle which he offered to the site of the demonstration as part of the “exhibition”. He too lay in the road with the others like a man shot by Russian assassins. The politician told FORUM 24: “It’s awful to just look at these photos. And these people had to go through it. And end up dying. I think it’s time to act militarily against Russia. Even if only a few states, not the whole of NATO. Personally, I even believe that it will come to pass that the use of force by the North Atlantic Alliance will have to take place. Because Putin does not understand anything about it. “other than force. We always act like it’s a normal state that can be dealt with normally. But it’s not. We have to realize that we’re up against a war criminal who won’t stop only if he is forced to.”

It is a moral obligation to protest against the crimes against humanity committed by Putin’s occupying army. They therefore demand the expulsion of the Russian ambassador Alexander Zmeevsky and the maintenance of only the most necessary consular services. In their press release, they state: “In response to the unacceptable behavior of the Russian Federation, we call on the government of the Czech Republic to start the process of expropriation of all Russian property in the Czech Republic, including the building of the embassy in Ukrajinských. hrdinů street. A possible sale of Russian assets in the Czech Republic would create a fund to compensate war survivors and rebuild Ukraine after the war. »

David Šteffel of Dekomunisti Group, the organizer of the event, told FORUM 24: “This is an extremely emotional affair. It’s not happening like any other, like any of the previous ones we’ve staged. Perhaps the strongest feeling is the realization that we are going to get up, wash off the color and go home, to our families. Those we have honored in this way are the real ones, but they will never be seen again.”

“Our ‘blood’ shed on the road is nothing against the real blood shed due to the ruthless policies of Putin’s war monster,” protest organizers said. “However, we strongly emphasize that we reject any hatred of Russian citizens as a whole. We are convinced that most of our fellow Russian citizens are against this aggression, and many have already made it public, for example by rallying Russians against Putin or attending a concert for Ukraine in Letná, so you have to make a distinction.”