We have been building houses for a long time to protect ourselves from the weather. Today they are safe blocks that will keep us cool, warm in winter and dry all year round. We are not very interested in how houses harm nature. Could it be done differently? Yes it works. Thanks to the so-called living architecture.

We produce nutrients. I like to say to people: please come see us.

These questions were asked by architect and designer Jason McLennan as early as 2006, when the international non-profit organization Living Future Institute launched the Living Building Challenge. He then wrote down his thoughts and quit.

Jason McLennan left his own successful business. He wanted to start building houses that benefit nature

At that time, he was the youngest partner in a very successful architectural firm. Nevertheless, he sold his share, moved to a more expensive location, and started working in the nonprofit sector. He lived on a minimal budget. People thought he was crazy, but McLennan had a dream. He wanted to build buildings that help nature. “A lot has happened in the last ten years, and I’m thrilled to report that I’m seeing the signs of a revolution in architecture that is spreading around the world,” McLennan says today.

McLennan helped build the new Bullitt Foundation building in Seattle, where it’s mostly cloudy or rainy. This doesn’t seem like the best place for a building powered primarily by solar power. Even so, the building produces more energy than it consumes annually. The building has 6 floors, compost toilets and no connection to the waste system. “We produce nutrients. I like to say to people, ‘Please come see us,’ McLennan laughs.

A living architecture must interact with its environment, not function independently of it.

Architecture of the future

This new direction in construction is called living architecture. A living architecture must interact with its environment, not function independently of it. It must reduce energy consumption by 60 to 80% compared to traditional buildings, be totally self-sufficient in water and energy, and avoid any chemicals that could be harmful to human health. It is a very young industry, but the first stars and promising projects are already appearing.

Magnus Larsson wants to create a sandstone wall across the desert. He wants to build underground dwellings and farms inside the wall.

One of them is a Swedish architect Magnus Larssonwho found a way to deal with the progression of desertification. He wants to create a sandstone wall across the desert. Additionally, he wants to plant underground dwellings and farms inside the wall, which would allow the edges of the desert to green over time. And how will he achieve it? With the help of bacillus pasteuri, a microorganism living in wet and swampy areas, which is able to turn a pile of sand into sandstone. The design of Larsson’s underground dwellings was inspired by taphones, cave formations of sandstone, granite and limestone.

city ​​in the desert

Another star is Danish architect Bjarke Ingels, who was commissioned to build a city on an island near Baku, the capital of Azerbaijan. The island itself is nothing more than a desert. 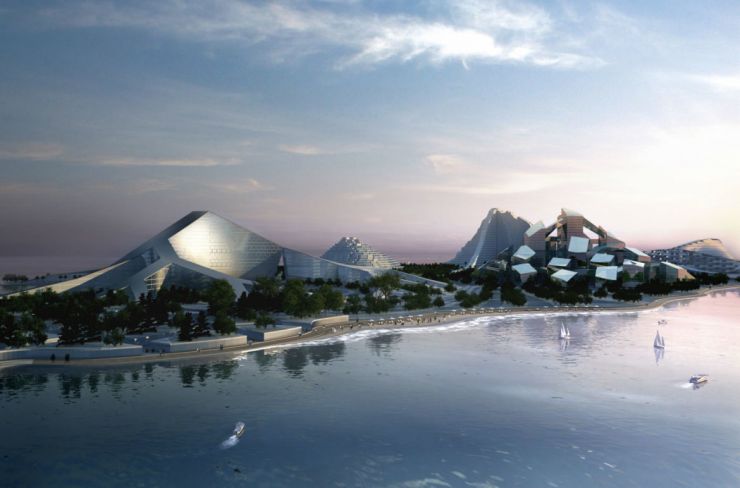 The desert near Baku, which is to turn into a green city, is called Zira Island

“It has no water, energy or natural resources. Therefore, we have designed the whole island as the only ecosystem that uses wind energy to power desalination plants and uses the thermal properties of water to heat or cool buildings We will organically filter excess fresh and utility water into the landscape We will gradually turn the desert into a green space Cities usually grow at the expense of nature, in our case the city creates nature, “says Ingels. The skyscrapers themselves, designed according to the main Azerbaijani hills, not only look like mountains, but also function like mountains. “They create shelter from the wind, collect solar energy and water,” added Ingels.

Living architecture probably doesn’t save the whole world. But it represents promising prospects. And because of what human beings have done on the planet in recent decades, they may come to understand this type of architecture. So far, concrete jungles grow faster than green ones.