First, how do I feel? Normally. I am not sick, I am a perfectly healthy person. I understand exactly what is happening and I decide quite calmly. I think it’s very important for us.

Our soldiers have shown their perseverance, their strength, there is also an important balance. On one side is power and on the other show your relationship to the enemy. We speak to the commander, to the commander-in-chief, of humanity. It is very important for me to realize that we are defending our homeland, but we are not torturing anyone. We are ready not to win, it’s not a game, at all costs.

We have seen the relationship between the aggressor-occupiers and the Ukrainian prisoners, we have seen how they are treated by the Chechen militants. Unfortunately, we have also seen – and we are unfortunately showing it to the world today – what happens to ordinary civilians, not soldiers. As they block entire cities, they take their food, their water. Even in cities that did not suffer the bombardments, the occupants voluntarily cut off the electricity. No, we fight even civilized.

I started talking about something else and I’m going to end up with something else: I sleep well. I’ve never been a heavy sleeper, but I’ve always slept well. Now I focus more on work and what I do and what I say requires more concentration. I want me to provide people with only positive information, not just to make them smile, but to make the message sound positive. We see that the people are defending our state and we see that it is our greatest treasure. They are our defense, our Iron Vault, our defensive alliance. 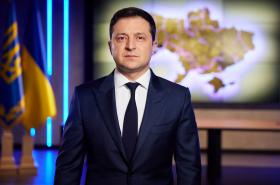 At the head of the invaded country is a former comedian. Zelensky reassures the Ukrainians and gives them weapons

What will be essential in these historical changes and trials? I’m not going to compare it to what you said. I think it’s a test for the whole world, and unfortunately it’s happening on our territory. I say this to you as a citizen of this country. I wouldn’t be happy at all if people from other countries died, but of course it’s much more painful for us than for other countries. Because someone from each family is either at the front, was injured, had to leave the country, or unfortunately it can happen in the future.

It’s hard for me to say which is more important, but it’s a test for the world. Covid has also been an ordeal. I saw a lot of things that I didn’t talk about in public. I didn’t show up in public as much before, but we’ve been extremely upset since the outbreak began because we haven’t been able to bring to our country as many vaccines as we would consider fair to others. I didn’t want our country to suffer because of that, I didn’t want to say: ‘Look how few our countries have partners in the world, how few vaccines they send us. We will have to change our policy and do everything ourselves.’

At that time, I did not know how to start the production of the vaccine, in our country this production has not developed for several decades. Now, I’m not talking about the past leadership of our country. At that time, no one knew how it was made and what to do with it. The world was not ready for the covid, for such trials and for such risks.

In the covid epidemic, I realized that if God didn’t do it, something like war happened, we could only have a small circle of countries around us – and basically it happened. There are several real partners and we have worked quietly with them. We haven’t talked about it much in public. We weren’t preparing for war. Not because we wouldn’t find a way out, but because Russia didn’t want peace and doesn’t want it now.

Russia has started a full-scale war in our country, so any president, any citizen of our country would want peace and wants peace. I too want peace. Something might change in the future. It’s important to us. So the unit – when you ask how it changes – has already changed.

Politicians are afraid of their citizens because they see that nations react differently. In many cases, the nations support us one hundred percent, while the rulers do not. I don’t want to judge them, I don’t want to say who’s right, but public opinion should just be stronger, whoever leads it. We have to monitor the social processes, because it leads to the rule of the people. The power of the people is not a revolution, it is above all that the real power is in the hands of the people. If you want to be a real business leader and not a commander, you have to live with your business and think with it in one direction.

Other alliances or security alliances will certainly emerge in the future. This does not mean that we have to act on those that exist today or destroy what exists today. But people want peace, quiet and security. Safety is the most important thing. Whether it’s covid, another disease or an upcoming war, a citizen who lives here and pays taxes (or comes from somewhere, has settled down and is a citizen of the world) needs to know that they will be protected in that state, and if he moves to another state, he will therefore also be protected there. This is how the world changes. Either we accept this model and make new alliances, or world leaders change in many places and find such people around them.

I have a question about the alliances you are talking about and about the compromises to which Ukraine is ready. Do you agree that Ukraine would renounce NATO membership and Euro-Atlantic integration?

I would approach it like they do in heavyweight athletics. They have several options and no one can lift a heavy weight just once. He has several attempts. Our situation is difficult because Russia is our neighbor and is fighting against us. There is NATO, we have a constitution within the constitution.

You are also fighting for our lives and our freedom, Fiala said. Zelensky appreciated the visit of the three prime ministers

Society sees it that way, but some countries see us a little differently and in different contexts. Within the Alliance, about a third of the countries do not see us there, and have even said so publicly. Others are afraid to talk about it in public. Here we come back to the previous question. The company will probably put pressure on me. I think we will be able to withstand this test of steel, this weight that we have to lift.

First, we need to understand if Russia wants to stop the war and if it can. If we understand that he is able to do this because he wants to avoid the consequences of sanctions, he wants to avoid supply problems, empty stores, drastic changes at the highest level of power, then we must, with Western partners, to find the first step that will have to be taken and through which it will be possible to stop any aggressor.

I don’t think it’s possible to answer this question without meeting Putin in some form. And I’ve been saying that for many years. We are not even able to understand what they are capable of, what they aim to stop the war. These are serious things. What human value it will be, what territorial price it will be. I only know one thing. Neither history nor our state will forgive us for the loss of our inhabitants and our people, nor will future generations forgive us for the loss of our territory.

The trade-off is something you need to know at what cost. We cannot even renounce the imprint of our territory and we must do everything so that Donbass and Crimea return (Ukraine). Each of our fellow citizens knows this.