“We have received information that the Russian army has occupied our biggest hospital and is taking our patients and doctors hostage,” Mariupol Deputy Mayor Serhiy Orlov said, according to the British station’s English service. According to reports, the hospital has 400 patients and 100 doctors.

“It is not possible to leave the hospital.” According to the Russian-speaking BBC, the words of one of the staff of the medical institution of the governor of the Donetsk region, Pavlo Kyrylenko. “They’re shooting hard, we’re sitting in the basement. Cars cannot drive to the hospital for two days. High-rise buildings are burning around… The Russians drove 400 people from nearby houses to our hospital. We can’t go out.” said the employee, according to the governor.

The Daily Mail portal brought information that three premature babies were left without parents in the hospital. The governor added that the main hospital building had been badly damaged by the shelling, but medical staff continue to treat patients in temporary rooms set up in the basement.

The hospital would have been occupied during the evacuation, when around 20,000 people escaped from Mariupol through a humanitarian corridor.

Attacks on hospitals: an act of cruelty

The World Health Organization (WHO) said in a statement that 31 attacks on medical facilities have been recorded so far. Following the attacks Twelve people died and 34 others were injured, including 2 dead and 8 injured being paramedics. “Attack on the most vulnerable – babies, children, pregnant women and the sick, as well as health professionals who risk their own lives to save those of others – is an unimaginable act of cruelty,” WHO representatives.

Lack of oxygen for pregnant women

“We call for an immediate end to all attacks on healthcare in Ukraine. They have these terrible attacks resulting in death and serious injury to patients and healthcare professionals and also destroys the basic health infrastructure. Thousands of people have no health care, when they urgently need it,” he wrote in a statement from the WHO, joined by UNICEF and UNFPA ( United Nations Population Fund).

In a video address to the Italian parliament, Zelensky called for new sanctions against Russia and also said he would welcome the pope’s mediator in negotiations with Moscow.

Former world best footballer Andriy Shevchenko is hosting two Ukrainian refugee families in his home in Surrey. He also founded a charity fundraiser, in which he wants to raise two million pounds (about 59 million crowns) to help compatriots affected by the Russian invasion.

The former captain and coach of the Ukrainian national team admitted he was in shock after the start of the Russian attack. “But right after that, I started thinking about how I could help my country,” Shevchenko, 45, told The Times.

The Ukrainian military says the Russian company, which manufactures and repairs tanks, has suspended work. According to her, the occupying troops are necessarily they need to recover damaged military equipment. The Unian agency writes that the Uralvagonzavod company, which it says is the only Russian tank manufacturer, has been hit by sanctions from the European Union, Great Britain and Japan.

“According to the information available the works of Uralzavod and the Chelyabinsk Tractor Plant were suspended due to a lack of foreign production components,“The Ukrainian General Staff wrote on Facebook, saying that these companies specialize in the manufacture and repair of tanks and other armored vehicles.

“Since the beginning of the war, there have been more 4,300 births and 80,000 Ukrainian women are expected to give birth in the next three months. » International organisations. At the same time, they warned that oxygen and medical supplies, especially those used in the treatment of complicated births occur.

From the beginning of the Russian invasion, he lost his life in besieged Mariupol more than 2500 inhabitants, ask the local authorities. More than 430,000 people lived in this strategic port city before the war. Many residents are trying to survive in underground shelters, the BBC said.

In Mariupol, which has long been exposed to intense Russian bombardment, hundreds of thousands of people suffer from lack of water, food, medicine, electricity and heating. 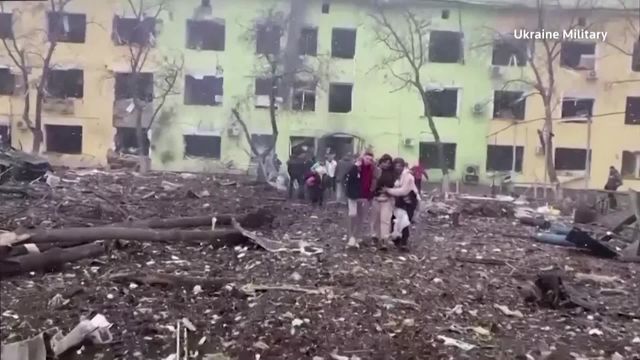